IMPACT OF MICROALGAE ON AIR QUALITY 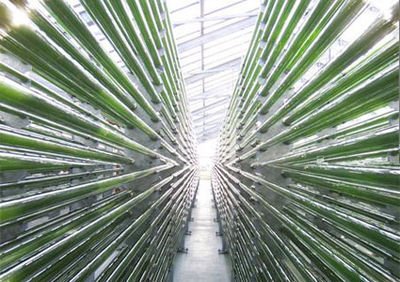 Its role of atmosphere purifier.
Spirulina is a great provider of oxygen. Forests play an important role in storing carbon dioxide (CO2). Trees are the best plants for fixing carbon: from 1 to 4 tons per year and per hectare. But Spirulina is even more effective: in the California desert, it can fix up to 6.3 tonnes of carbon per hectare / year; at the same time it will produce 16.8 tons of oxygen (ha / year).
Spirulina is the only fixed nitrogen .....
Purification system: François Haldermann presented at the symposium of Mialet on spirulina (in June 2012), his aeration system made in Ecuador to digest organic matter accumulated in culture media. We go from a BOD (biological oxygen demand) of 15mg to a BOD of 8mg. This aeration system allows a total recycling of the culture medium, while maintaining high productivity basins.

Microalgae culture in a continuous photobioreactor
These studies confirm the fixation of dissolved CO2 in the form of organic matter via photosynthesis. The different carbon species, which are formed during the dissolution of CO2 in the aquatic environment, and the formation of O2 depend on the temperature and pH.
It is clear that the nitrogen concentration acts directly on the formation of biomass thus defining the amount of protein and chlorophyll per cell. Phosphorus fixed by algae is also necessary for the transport of photons during photosynthesis.
Carbon metabolism and the assimilation of nitrogen and phosphorus are therefore directly influenced by enzymatic regulations associated with heavy metals.
Since carbonic anhydrase is a zinc-containing metalloenzyme, a decrease in its activity in response to zinc deficiency may affect the entire
carbon metabolism of the cell and therefore the production of intracellular metabolites. often the functioning of the photosynthetic apparatus, for example a too low concentration of sulphide will reduce the flow of electrons at the level of the photosynthetic apparatus (Rochaix, 2001) and a decrease in the iron concentration will induce a decrease in the constituents of the photosynthetic apparatus (PSI, PSII, cytochromes) because they have many co-factors containing iron (Terauchi et al., 2010). Similarly, since copper is present in many enzymes in the photosynthetic apparatus, its limitation impacts photosynthetic metabolism (Hill et al., 1996, Rochaix, 2001). But other intracellular processes may be involved; this is the case of nitrogen metabolism, the assimilation of which in the cell is reduced during a molybdenum deficiency in the medium (Glass et al., 2009). An increase of these elements in the medium will, conversely, have a positive impact on the cells. This is the case of magnesium or iron which allow the increase of the cellular concentration when they are in higher concentration in the medium (Mandalam).

Conclusion
In conclusion we are able to say that the Cyanobacteria "Spirulina" feed on CO2 but also fix nitrogen and heavy metals such as lead, arsenic and cadmium while restoring O2 (dioxygen) in large quantity. Spirulina is therefore a most effective air purifier.
Although it is mostly used today for its biomass and the production of clean energy, several companies and research centers such as NASA, ESA or Suez, already use it for its depolluting properties.